How can we take a systemic approach to conflict?

“Conflict transformation is clear in vision because it brings into focus the horizon toward which we journey, namely the building of healthy relationships and communities…. This process requires significant changes in our current ways of relating.”

“Out beyond ideas of wrongdoing
and rightdoing there is a field.
I’ll meet you there.”

Conflict is everywhere, from inter-team politics to the tragedy of armed warfare. Within organisations it can turn up as stalemate or even sabotage.  It often gets talked about behind backs around the water cooler or with feelings buried under cold politeness.  It turns up in teams as feeling stuck or small – vented in flares of rage.  We all recognise these patterns and have felt our own energy levels depleted because of them.  We’ve seen and experienced the stagnating effect of conflict on the creativity and performance of individuals, teams – entire organisations.

As leaders and changemakers, if we know conflict is inevitable in organisations why does it have such a big, negative impact and why does it get us so ‘stuck’?  How do we look squarely at the conflicts we each experience daily in this VUCA world and find a way through to transformation and flow?

The visual lens of systemic constellations reveals in a graphic way that purpose has a unique potential to create an energetic wellspring – and “magnetise” people to pull in the same direction – but this can only happen in a supportive culture and environment. Truly purpose-led organisations are healthy living systems, with a good flow of value, exchange and a vitality in their people and culture.

We recently worked with a distribution warehouse in an international publishing company (4,000 + staff).  Six years before, it had seen a bitter strike over wages.  The ‘ring leaders’ had lost their jobs and the conflict was ‘brushed under the carpet’ at the time.  Many staff employed during the strike were no-longer with the company, but the conflict was still reverberating through the system.  Every few years a similar incident would emerge.  The senior leadership and staff continued to cast the blame towards one another and so the conflict continued its hold over relationships.  The result was a painful and seemingly intractable situation.

When we arrived, the senior leadership were overwhelmed with disaffected staff, absence and declining productivity.  They were under pressure to sort the business out, but were seen to be ‘passing the buck’ to the supervisors who were struggling to cope.  Through our initial consultation, it became obvious that this historic conflict was casting a shadow over the future of the business, threatening its survival.  It also became clear that it was saying something important about the organisational system that needed to be heard.

Trust between the leadership and staff had eroded to an almost non-existent level and it would be impossible to move beyond the ‘stuckness’ of the situation until this changed.  How we could listen to this conflict without escalating it?

As happened in the warehouse, our tendency to polarise conflict into simple binary terms focuses our attention on the individual or on groups rather than the system – and so we lose sight of the wider relationships involved and the possibility to learn from why the conflict arose in the first place.  As leaders, or consultants we can easily be swept up into conflict situations to ‘fix’ the problem.  This was certainly the desperate plea of the warehouse senior leadership and the staff.

“We are right, they are wrong.  If they changed, everything would change.  We are the victims here and they are persecuting me!  I need you to sort this out!”

At worst, we confront conflict with the same fire and energy that’s driving it, and this merely escalates it.  At best, we try to ‘resolve’ the presenting issue with short term solutions and compromises.  While this may temporarily resolve the conflict, deeper, systemic issues remain so we often find a similar conflict popping up in another place – so we start the process all over again.

In organisations, leaders are asked to manage the complexity and multiplicity of systems yet our experience of conflict invites simplistic thinking and polarisation.  It triggers uncomfortable feelings that are hard to manage and own – so we project them onto the other.  If we’re going to understand what conflict is trying to teach us, and work through it to a place of flow, our approach needs to use the same systemic perspective we apply to other matters.

When we resolve a conflict we are negotiating and problem solving.  Problem solving is fine if I have no relationship with you and we need to resolve something quickly to move on with our lives – like a one-time business payment dispute.  We’ll never see each other again.

When we transform a conflict, we are developing and being in long-term relationship with one another.   In organisations, we do need to be in ongoing creative, trusting relationships.  As we see in the warehouse, the performance of the organisational system is affected by the conflict as long as it persists.  This is why the short-term gain of ‘resolution’ often isn’t productive on its own: it doesn’t consider the relationship dynamics that are generating ‘the problem’ and will perpetuate it. 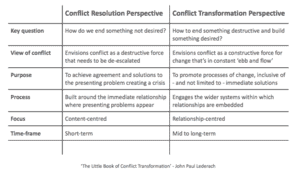 Why a systemic constellation approach to conflict transformation?

Systemic Coaching and Constellations work has emerged over the last 20 years as a powerful, awareness-based approach to seeing and transforming challenges in our organisational and professional lives.  By creating maps of a whole system, it enables the hidden dynamics of even seemingly intractable conflicts to be illuminated – and often resolved – quickly and effectively.

While the effects of conflict are often personal, we recognise its causes are often also systemic and structural.  Our approach builds the capacity to view conflict from different perspectives within an organisation to reveal its underlying causes.  When we start to see conflict as our teacher, we ask different questions of it and these questions can lead to growth and innovation.

As you see from the above example, we support people to question conflict from four levels:

How we worked with the warehouse

Step One: Engaging the symptoms and systems within which relationships are embedded

After spending time with groups separately, we created a safe, contained space for everyone to talk honestly about the conflict and understand it as a whole community.  We allowed time for difficult and sometimes painful feelings to be expressed, as well as supporting the organisation to take a deeper look at the origins of the historic conflict and the systemic issues at play.  The key to this stage is to remind each side of the humanity of the other and to take a wider view.

Once the senior leadership started to take ownership of the effect the strike had had on the organisation and explore what they needed to do differently, and once staff started to take responsibility for their own behaviour and role in reducing productivity, dialogue started to ‘flow’.

Both groups started developing a collective vision for their future and an understanding the importance of each role within it.

The leadership became more accessible and less defensive, and increasingly open to ideas.  Staff became willing to participate in finding concrete solutions to better the situation for all.  Much of the cause of the conflict was top heavy decision making and heavy handed structures.  Small ‘action groups’ were set up at all levels of the organisation to explore how to improve certain internal processes, particularly how decisions were made.

Step Three: Working together over a long-range horizon

This was not a simple, one time process.  We worked with the organisation for over a year – as the start of a fundamental change in the business.  Today, the warehouse is thriving.  Systems are working effectively and are robust; communication channels have been opened up.  Importantly, there has been a marked improvement in the ‘atmosphere’ of the place and employee engagement.

Conflict is telling us something.  It invites us to stop and have good look under the bonnet of our organisation, before it breaks down.  A Systemic Constellation approach encourages us to take a wide look at an issue to see how different parts of the system are responding.  Through it, we can find solutions that support the organisation and individuals to move beyond ‘stuckness’ to ‘flow.’

This profound two-day programme helps you to explore how to use a systemic approach in the conflicts you are encountering in your organisation.  We will support you to find practical ways of moving forward to a place of transformation and flow.

To be informed about upcoming dates for this programme sign up to our newsletter.

Milly has been working as a facilitator for over 20 years, particularly around areas of leadership, conflict transformation and change.  Originally with a psychotherapeutic and theatre background, she brings up to date psychological and business theory to life with a creative approach.